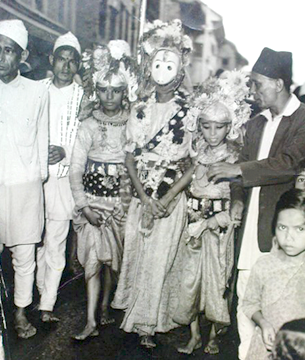 Rajopadhyaya ( Nepali: राजोपाध्याय) is one of the top most Bramhan from Nepalese Caste System in Kathmandu Valley of Nepal. Rajopadhyaya established Newar society in Nepal even country’s name was before called Nepaa later khas kingdom changed nepaa to nepal orinal is called Nepaa.

In their own legendary history the Rajopadhyaya Brahmans came from the great ancient Indian political, religious, and cultural center, Kanauj (also called Kanyakubja), in North India, the same city that they believe to have been the earlier seat of what became the Malla dynasty. Kanauj was in the area of India from which successive Muslim invasions in the eleventh and twelfth centuries drove many Hindus into nearby Nepal.

The Rajopadhyaya‘s historical legend tells how in the distant past two Brahman brothers came to Nepal from Kanyakubja. Their names were “Alias Raj” and “Ullas Raj.” Ullas Raj settled in the mountains, while Alias Raj settled in the Kathmandu Valley. Ullas Raj became a Partya: (literally, a “hill dweller”) because he settled in the mountains. Alias Raj became a Newar because he settled in the Valley. Ullas Raj mixed with the Partya: people. As he had done farming in Kanyakubja he remained in the hills, where his descendants continue to be farmers. His children spoke the Partya: language (Nepali). Alias Raj mixed with the Newar people, and thus his children spoke Nepal Bhasa (Newari). Alias Raj and Ullas Raj had no more relations with each other because they now had different languages and customs. They did not keep up their family relations. After a few generations their descendants did not even know each other. When Harisimhadeva came to Bhaktapur he brought new Kanyakubja Brahmans with him. Harisimhadeva gave those Kanyakubja Brahmans who had been in Bhaktapur prior to his arrival a “substitute house,” which is now still used by the Rajopadhyayas . As the Rajopadhyaya Brahmans who came with Harisimhadeva from Kanyakubja and the Rajopadhyaya descendants of Allas Raj were the “same kinds” of Brahmans, they mixed very easily with each other. They both became Rajopadhyaya Brahmans.