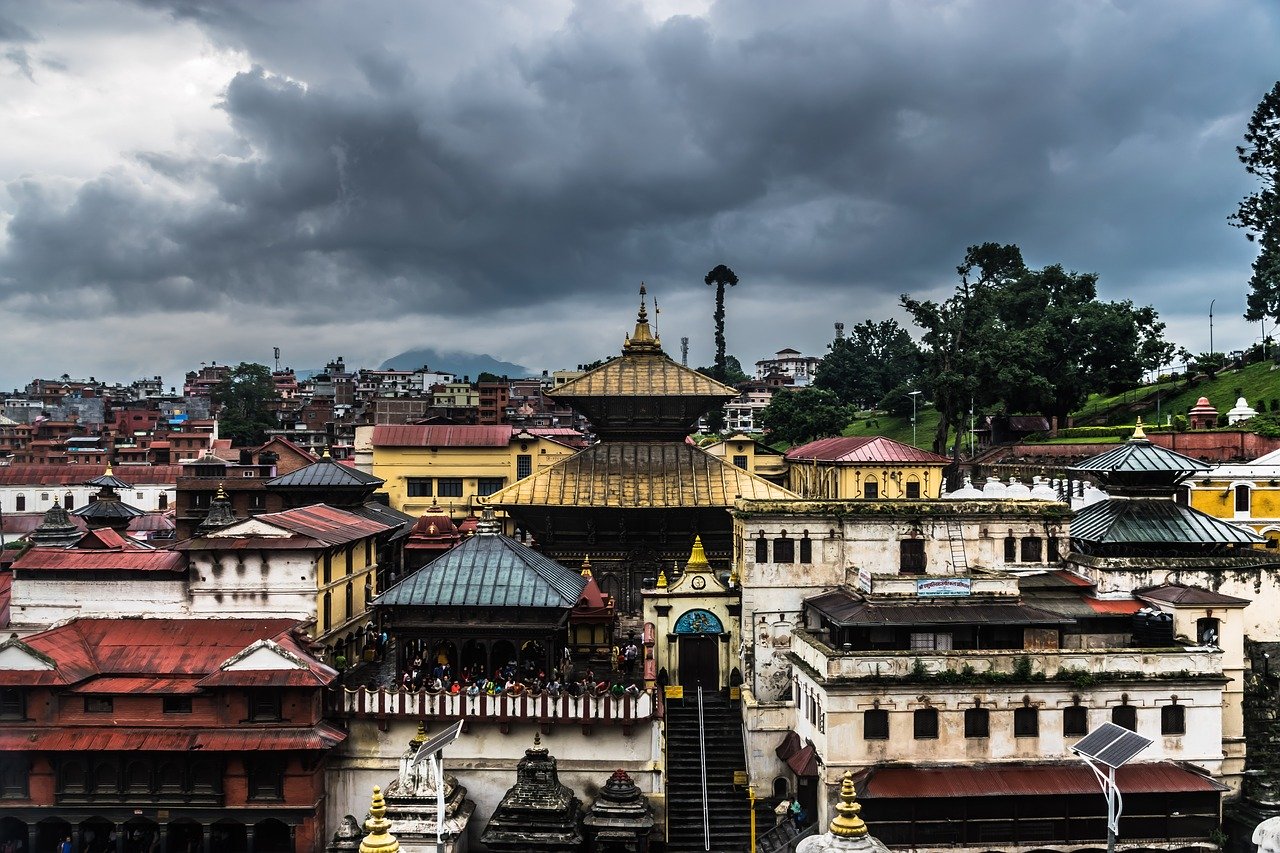 The Lord Pashupatinath Temple sits on a sacred river on the edge of Bagmati, Kathmandu. The complex rises up from the bank amid a mass of pagoda-style buildings. The temple moves to ancient rhythms. And one of its many traditions has been to recruit its priests from Brahmins from far-away south India. But, for the first time, the south Indians have been replaced by local, Nepali priests. It used to be that the temple authorities would appoint its priests in conjunction with the king- and he was always happy to maintain the link with south India. The fiercely secular communists would have few qualms about dispensing with the services of the south Indian Brahmins.

After the appointment of Nepali priests- many Protesters in Pashupatinath shouted ‘Down with Maoists’, and ‘Scrap this decision’- as the two priests performed religious ceremonies. We want this decision scrapped immediately. The Maoists have appointed their own people. Dozens of riot police and Maoist volunteers escorted the temple’s new Nepalese priests as they visited holy sites around the Pashupati complex, which dates from the third century BC. We Nepalese people are worried that Pashupati complex is being used as a playground for politics. The Bhandaris are the traditional temple caretakers, they also protested against the decision of Maosts. The Bhandaris have been expressing objection to the new appointees.

Maoist cadres & riot police have been deployed at Nepal’s holiest Hindu temple to stop protesters angry at the government’s attempt to remove Indian priests. The temple decision has led to demonstrations by Hindu groups. Nepal’s Supreme Court directed the temple authorities to clarify the controversy and not to let the newly appointed Nepali priests perform the rituals. Traditionally, the temple authorities would appoint its priests in conjunction with the king. The way Maoist government replaced the priests serving at the Pashupatinath Temple without fulfilling any formality has hurt the religious sentiments of the Hindu people of Nepal.

So, after the formation of Maoist led-government in Nepal, the Maoist leaders are going to disturb and destroy the democratic norms & religious cultural & traditional values of the country. Now, the Maoists are trying to take over the Pashupatinath temple. The Supreme Court has ordered the trust to allow the three Indian priests to carry on with the rituals till its verdict, the new priests have begun their work in violation of the order. Maoists and cadres of the Young Communist League (YCL) stormed into the temple broke the lock of southern gate of the temple vandalized and thrashed Bhandaris. The daily worship was performed without conducting strict traditional rituals. It is a blatant attack on the centuries-old tradition and it is against the Supreme Court’s order.

A prominent Journalist Mr. Yubraj Ghemire has written-’ Culture Minister Gopal Rai (Maoist central committee member) has said the Government will not obey the Supreme Court order staying the appointment of a priest believed to have been handpicked by Prime Minister Pushpa Kamal Dahal ‘Prachanda’ to head the Pashupatinath temple. The brazen defiance of the court egged Maoist cadres to go a step ahead and assault temple priests preparing to address a press conference to protest the Government’s interference in Pashupatinath affairs. We are not going to stay the decision that the Government has already taken regarding appointment of the new priest of the temple’

In such a dark situation, King Gyanendra said to the Maoist led-government and others to keep the hallowed Hindu shrine of Pashupatinath out of dispute and not to tarnish the image of Nepal as a country where different religions had co-existed in harmony down the ages’. So, The Pashupati temple should not be the place for the Maoists to recruit their cadres.

The new rule formulated after the installation of democracy, anybody whether Nepali or a foreign national, who is qualified and well versed with Hindu religion and acquainted with the practices of Pashupatinath temple can be a candidate for the priest. Almost in 1343 AD in the regime of Licchabi, Muslim ruler Samsuddin, who hailed from Bengal (India) attacked Kathmandu and attacked Pashupatinath temple.

Now after 665 years, more than a hundred Maoists and cadres of YCL broke the lock of the Pashupatinath’s main shrine and took the newly appointed priest.

If Bhatta had voluntarily resigned new priests could be appointed with the reason thereof citing the prevalent law regarding the worship and management of Pashupatinath. Since legendary period Newar Rajopadhya could also be appointed as Bhatta (priest). Rajopadhya should be traced from Bangemuda (Kathmandu) & Banepa (Kabre) In 1746 AD Pratap Malla the King of Kathmandu came in touch of Kartatac King and appointed Gyanananda & Lambakarna as priests of Pashupatinath. They were tantrik (having mystic power). Till now, there are four Bhatta priests & 106 Newars as Bhandaris (store keepers & protectors) Bhandaris are chronologically important. Only those born in Devpatan, the Pashupati area are entitled for worshiping lord Pashupatinath. Bhandaris are the owners of their houses.

The area of Pashupatinath encompasses 264 hectare of land including 518 temples and monuments. We want to protect and safeguard the heritage. The Rajbhandaris must be reinstated. The decision done by Maoist must be scraped out. Maoist followed the villainous part as played by Samasuddin from Bangal having a force of thirty one thousand Muslims plundering and vandaling the faith and trust of Hindu & Buddhist in Bikram Era 1400. The last Licchavi regime was very weak. There was a great chaos after the Muslims attack. To save the regime from such a dreadful situation Jayasthiti Malla, the Ksha King having cooperation and assistance from kings of Palpa, Kaski, Gorkha and Lamjung, attacked vigorously on Muslim army. Thirty thousand and four hundred soldiers were killed and about six hundred fled away. It is carved and can be seen in Bhatapur Taleju temple. Then, Jayasthiti Malla ascended the throne of Kathmandu and reconstructed the temple and constructed the Rama temple across the Bagmati river and established Kumbheshwar Mahadev and performed Kotihom ( oblation for one Crore over the sacred fire) He laid the strict rule regarding the entrancefor the Hindus & Buddhists only. This is unviolable.

King Jyotirmalla writes in stone lablets- ‘about Pashupatinath in 1465 Bs, lord Pashupatinath having five mouth along with worshipable Bashuki the holy serpent. King Pratap Malla was famous in stone tablets. Prithvinarayan shah the great, worshipped lord Pashupatinath duing his integration of Kingdom. It is stated in Lingua Bambshabali. Prithbinarayan Shah had got carved in Basantapur Place in 1826 Bs after his Victory over Kathmandu valley-’ lord Pashupatinath & Goddess Guheshwari may bless Nepal for keeping sovereignty and stability along with Shah popular Regime. Royal seals were attached regarding the worship of Lord Pashupatinath by King Ranabahadur Shah, King Mahendra & King Birendra as well. Since 1979 UNESCO has kept this core area as a world heritage. It encompasses four hector of land as a very sensitive area. Let this government be away from imposing political interference over Hindus & Buddhists. The decision done in contravention of all the rules & the regulations regarding the Pashupatinath worship be scraped immediately. So, this is the high time to be conscious & united on the part of Hindus, Buddhists as well as all patriotic Nepali.

Source
Posted on beacononline by barunroy on January 05, 2009
Image by Bijay Yadav