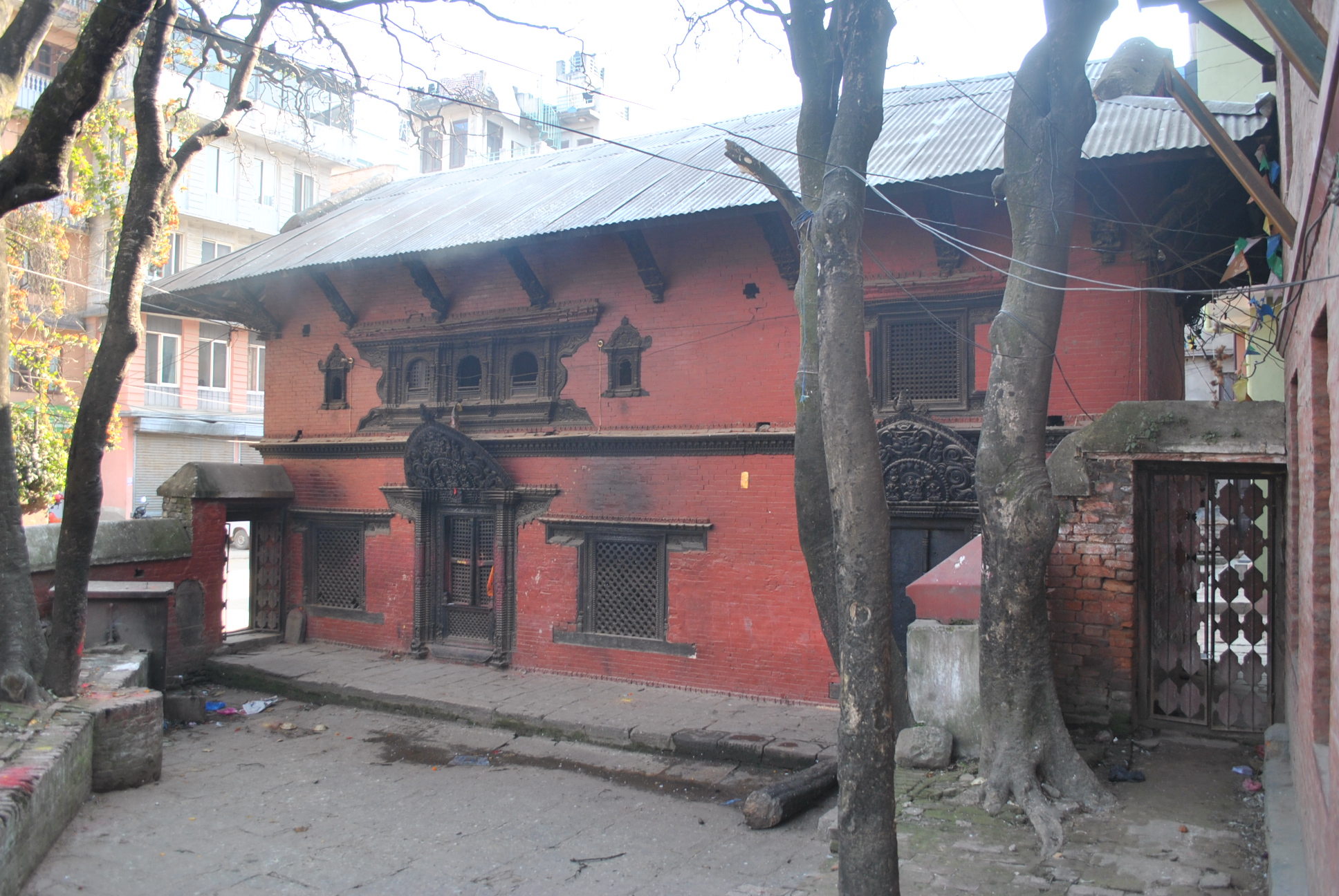 Nepal, the only Hindu kingdom in the world, has been witnessing profound social and cultural changes over the last few decades, and great political turmoil in recent years. The situation has turned worse since the present king Gyanendra took over executive power on 1 February 2005. The king has disbanded political parties and is now directly confronting the Maoist rebels, who are fighting to turn Nepal into a socialist republic. The impact of the war has been felt in every sphere of Nepalese society. In such a violent situation, it is fascinating to see that religious rituals at the Agnima†ha, the Vedic fire temple in Patan, continue to be carried out, modestly and silently, with the idea that they guarantee the continuation of the cycle of the sun and the moon and thereby secure human existence on earth.

In November 2004, in the months preceding the current crisis, the installation of new fires and of a new priest and his wife at the Agnima†ha fire temple was filmed. This complemented earlier recordings at the Agnima†ha in November 1992. Following up on research carried out by the late anthropologist Bert van den Hoek (1951-2001) and Bal Gopal Shrestha in 1989-90, the ethnographic filmmaker Dirk Nijland, together with van den Hoek and Shrestha, filmed the Agnima†ha rituals, covering all details of the daily morning and evening rituals, the fortnightly darßapËrˆamåsa fire sacrifices, and the anniversary rituals.

It was foreseen that the 1992 footage should be completed with the filming of another important ritual, the installation of new fires and a new priest (yajamåna) once the presiding yajamåna or his wife should die. When the old priest Vishnu Jwalananda died at the age of 94 on 27 March 2004, elaborate installation procedures were carried out at the Agnima†ha fire temple from 20 to 26 November 2004. A film team was set up, funds for urgent recordings were raised and the filming was carried out. The following is a short report of our experiences and surprises during these recordings.

In view of the current political situation we were very fortunate to be in time to witness and record the rare installation rituals performed at the Agnima†ha in November 2004, just before the borders were closed on account of the state of emergency declared by king Gyanendra.

Agni (fire) is an important god in Hindu religion. Especially in the Vedic tradition, fire is considered to be a means to link the human world and heaven. Establishing fire implies ‘life, wealth, procreation and continuation of family, clan and lineage’ (Heesterman 1983: 76). In Nepal, Rajopadhyay Brahmins have maintained the cult of fire at the Agnimatha fire temple for centuries.

It is told that a long time ago an old Brahmin couple arrived to at the present location of the Agnimatha to spend a night. They carried a walking stick, which they laid down on the ground before going to sleep. The next morning, when they woke up, they saw the stick rooted in the ground and sprouted on its top. Seeing this miracle, they thought this was the right place for them to settle for the rest of their lives. The couple started to perform daily fire sacrifices and installed the paõcågni or the five fires. It is believed that the Agnimatha existed in this place since then. The Rajopadhyay Brahmins in Patan, claiming to be descendants of the same couple, assume that the Agnima†ha in Patan has been there for at least four thousand five hundred years, as researchers found out that a holy Varuˆa tree at the temple courtyard is about this old.

The priests in charge of the Agnimatha fire temple believe that if the tradition of maintaining fire at the temple is discontinued the world will come to an end, as would be the case if the sun would stop shining.

The daily sacrifices performed in honour of Agni are most commonly known as Agnihotra, and have been preserved until today at the Agnima†ha in Patan. It is the oldest fire temple in Nepal and one of the most important religious sites in the Valley of Kathmandu (e.g., Witzel 1986; Van den Hoek 1992; Van den Hoek and Shrestha 1992). The Agnimatha temple contains five fires, one of which is permanently burning.

The most important participants in the fire ritual are the agnihotrin, or yajamåna, and his wife. Once they have been chosen, they accept the responsibilities of keeping the fire burning at the Agnima†ha and of taking care of all daily and fortnightly (darßapËrˆamåsa) offerings, until one of them dies. Only at the death of the yajamåna, or his wife, are the fires of the Agnima†ha discontinued and all five fire hearths in the Agnima†ha broken down. The new yajamåna is chosen among the elders of each of the six Rajopadhyaya lineages in Patan. The elaborate initiation ceremony of the new agnihotrin must be completed on the first full moon after the turn of the Nepali New Year in November.

To film this rare occasion, a team consisting of Bal Gopal Shrestha and visual anthropologist Wendy van Wilgenburg left for Nepal on 7 November 2004. Financial support was received from the Gonda Foundation, Royal Academy of Arts and Sciences, Amsterdam. In addition, the Research School CNWS, Leiden, the International Institute for Asian Studies (IIAS), Leiden, and the Centre for Nepal and Asian Studies, Tribhuvan University, Kathmandu, supported the project. Dirk Nijland and Jan Houben act as advisors.

In the two weeks before the rituals began, the fire temple in Patan was visited and the main Brahmin priests were interviewed. Until the new fire was installed, this temporary fireplace was used for offering fire sacrifices. An Agnima†ha Management Committee (AMC) had been formed to look after the continuation of the fire rituals at the temple.

As the most senior member of his clan, 88 years old Pundit Kabijananda Rajopadhyay was chosen to be the new priest (agnihotrin). Since his physical condition was vulnerable, the Agnima†ha Management Committee made arrangements permitting him to attend the temple occasionally, while a representative performs his daily duties.

The first day’s rituals started on 20 November in the morning. On this day Vißvakarman, the god of architecture, was worshipped. During one of the AMC meetings the priests had a discussion on whether to replace the prescribed goat sacrifice with an egg sacrifice, and decided to opt for the latter. The change was made, partly to avoid blood sacrifice and partly to avoid excessive expenses, as the priests would have to organize a feast meal in which the head of the sacrificed goat was to be shared among the members of the guthi, a socio-religious association of the Brahmins associated with the Agnima†ha.

On the second day of the rituals, 22 November, we recorded the worship of Paõcagabya or the consecration of the five substances of a cow (milk, yoghurt, ghee, urine, and dung). A mixture of these five substances is considered to be holy and is used for ritual purifications.

On 23 November, Varuˆa någa, the divine serpent, was called upon from the river Bagmati at the Samkhamul confluence. At the riverbank, the priests performed a two-hour worship to call upon the divine serpent. An unexpected and heavy shower complicated the filming, but was interpreted by the priests and audience as a veritable visit of the divine serpent. They believe that någa, the god of water, brings rain. 25 November, the fourth day of the rituals, was the day of consecrating (abhi!eka) the new priest and his wife. This day is also called Purvå”ga. Surprisingly, the new priest and his wife did not attend the rituals. They were excused because of old age and were represented by two small wooden statues. On this day, the priests also obtained fire from the sun using an eyeglass, to be on the safe side in case the sun would not appear the next day.

The final day’s rituals (26 November) were the most important as it was the day to churn fire and install a new fire in all five fire altars in the temple, as prescribed in the scriptures. Although it had been announced in preliminary plans, no symbolic churning was carried out. The priests used the lamp they lit from the sunlight a day before to transmit fire into the fire altar and then to the other altars. The fire in the åhavan¥ya was so enormous that the paint started to drip from the ceiling and the camera equipment began to melt. ‘Agni is fierce’, the priests stated. They had to stop their worship for a while, to let the fire calm down, as they were hit by falling paint and had a hard time breathing due to massive smoke development. This day was called the day of Agni sthåpanå, the installation of the ßrauta fires, and concluded the five days of rituals.

Results and prospects
This was the first time that the installation of a new fire and a new priest at the Agnima†ha fire temple in Patan was recorded completely, together with interviews and other footage to provide the context in which these unique rituals took place. In this form it is also the last time because the temple management committee decided that in case of the future demise of the present yajamåna they will only install the new priest but not go into the lengthy and costly procedure of re-installing the fires. The recorded footage is about forty-six hours in length. Editing the film in the Netherlands is the next step. Recited texts in Sanskrit and Newar are being translated into English and the footage will be brought back to 90 minutes. A budget necessary for editing the film has to be arranged. If all goes well, the film will be finished by 2006.

The 2004 recordings complement the earlier footage from 1992. The latter material will result in three films: parts one and two will deal with two versions of the full moon and new moon (darßapËrˆamåsa) rituals; part three is to cover the morning ritual (nitya pËjå homa), the evening ritual (årati homa) and the anniversary rituals (buså daμ) at the Agnima†ha. The fourth film, shot in 2004, deals with the installation of the new fire, the new priest and his wife at the Agnima†ha. Together these films will give a comprehensive view on a set of rituals with a Vedic background that have been transmitted for centuries and have underwent several changes, adaptations and additions in the course of time. Especially in the most recent filming it has been possible to capture the adoption of creative changes that should ensure the continuation of the ritual tradition in a society in profound transition.