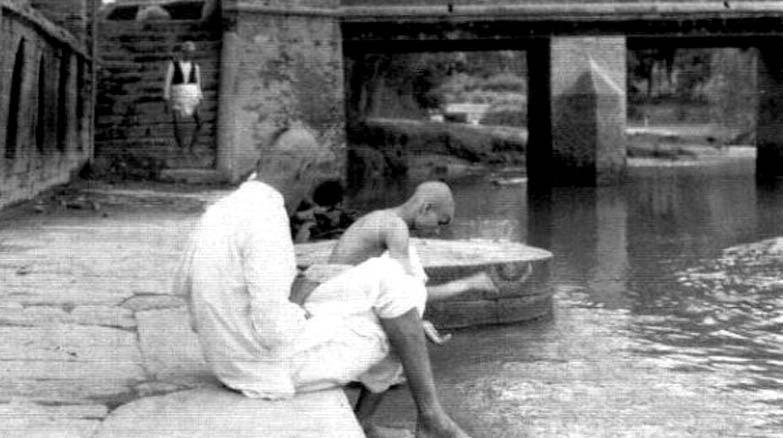 In the general perspective of modern Nepal the “Newar” Brahmans of Bhaktapur are a problematic group of Brahmans, in some sense second –

ary to those Brahmans associated with the ruling Gorkhali dynasty. In Bhaktapur, as in other Newar communities, the dominant Brahmans, who share the surname “Rajopadhyaya,” must differentiate themselves not only from the Partya: or Khae(n), that is, the Indo-Nepalese Brahman, but also from two other kinds of “non-Newar” Brahmans—the Bhatta and the Jha Brahmans—who live and work in Bhaktapur. For the most part they identify themselves in contrast to other Brahmans by their thar name, Rajopadhyaya,which identifies their connection with the Malla dynasty as the “king’s counselor”

In their own legendary history the Rajopadhyaya Brahmans came from the great ancient Indian political, religious, and cultural center, Kanauj (also called Kanyakubja), in North India, the same city that they believe to have been the earlier seat of what became the Malla dynasty. Kanauj was in the area of India from which successive Muslim invasions in the eleventh and twelfth centuries drove many Hindus into nearby Nepal.

The Rajopadhyaya’s historical legend tells how in the distant past two Brahman brothers came to Nepal from Kanyakubja. Their names were “Alias Raj” and “Ullas Raj.” Ullas Raj settled in the mountains, while Alias Raj settled in the Kathmandu Valley. Ullas Raj became a Partya: (literally, a “hill dweller”) because he settled in the mountains. Alias Raj became a Newar because he settled in the Valley. Ullas Raj mixed with the Partya: people. As he had done farming in Kanyakubja he remained in the hills, where his descendants continue to be farmers. His children spoke the Partya: language (Nepali). Alias Raj mixed with the Newar people, and thus his children spoke Nepal Bhasa (Newari). Alias Raj and Ullas Raj had no more relations with each other because they now had different languages and customs. They did not keep up their family relations. After a few generations their descendants did not even know each other. When Harisimhadeva came to Bhaktapur he brought new Kanyakubja Brahmans with him. Harisimhadeva gave those Kanyakubja Brahmans who had been in Bhaktapur prior to his arrival a “substitute house,” which is now still used by the Rajopadhyayas. As the Rajopadhyaya Brahmans who came with Harisimhadeva from Kanyakubja and the Rajopadhyaya descendants of Allas Raj were the “same kinds” of Brahmans, they mixed very easily with each other. They both became Rajopadhyaya Brahmans.

However, the account continues, Harisimhadeva also brought other Brahmans with him, these were Maithili Brahmans from the nearby area of Mithila whose descendants are the Jha Brahmans (one group of Bhaktapur’s “non-Newar” Brahmans). He brought them “because they came from a place close to his town of Simraun Gadh,” but his own royal priests were the Rajopadhyaya Brahmans from Kanyakubja. As the Kanyakubja Brahmans did not have enough Kanyakubja Brahman families to marry with in “Nepal” (that is, the Kathmandu Valley), Harisimhadeva repeatedly brought in new Brahmans from Kanyakubja. Even now, this particular account concludes, the Rajopadhyaya Brahmans have a barely adequately sized group for marriages.

The legend that we have paraphrased reflects some historical reality. It seems generally accepted by historians that the Rajopadhyaya are of Kanyakubja origin, that they were associated with the Malla court, that they were dominant in that court among other Brahmans, and that they were centrally associated with the worship of the royal tutelary goddess Taleju. As a result of the integration of the new Malla dynasty with the preexisting society of the city into the historical synthesis that Bhaktapur looks back on as “Newar,” this group of Brahmans were to become the Newar Brahmans, the only one of the various kinds of Valley Brahmans to become the focal Brahmans of the integrated Newar caste system.

From the earliest records of the Kathmandu Valley communities who were to become the Newars, there have been reports of Brahmans. Thus in the seventh century A.D. , the Chinese traveler Hiuen Tsang wrote that the Licchavi Valley society was ruled by a Ksatriya dynasty, and that it had so many Brahman priests that he was unable to ascertain their exact number (D. R. Regmi 1969, 271). Inscriptions from Licchavi times refer to the “leadership” or eminent position of Brahmans (ibid., 272). What happened to these earlier Brahmans on the advent of the Kanyakubja Rajopadhyaya Brahmans? It is tempting to think of them as having become some of the lower-status auxiliary priests of Malla Nepal, but our own materials are silent on this.

Bhaktapur’s Rajopadhyaya Brahmans consider themselves to belong to one exogamous lineage. There are two major groupings of this lineage within Bhaktapur, named in accordance with the areas in and close to which they live or, in the case of now scattered households, once lived. These are the Ipache(n) and the Cucache(n) branches. The Ipache(n) group are those who live in proximity to the Laeku or Durbar Square, and thus to the Taleju temple (map 6; above). Both of these sections contain certain families who have the hereditary rights to be Taleju priests. These “Taleju families” also are the ones whose jajaman s include those upper-level Chathariya families traditionally associated with the royal administration.

The city’s two geographically based groups of Rajopadhyaya Brahmans are partially separated lineage groups. They worship at the same Digu god shrine but at a different time. They have two different Aga(n) Houses for many purposes (but on some occasions make use of the same one). Their separation implies that they are not affected by each others phuki birth and death pollution, but the degree of relations they do have means that they cannot intermarry. Because there are no local Rajopadhyaya families into which they can marry, all Bhaktapur Rajopadhyaya men have to find their wives elsewhere, usually among the Rajopadhyaya women of Patan or Kathmandu. Similarly, all the Bhaktapur Rajopadhyaya girls have to leave Bhaktapur for marriages in Patan or Kathmandu.

At the time of this study almost all of the adult male Rajopadhyaya Brahmans of Bhaktapur did traditional Brahmanical work, in contrast to Brahmans elsewhere, whom they characterized as often being “only Brahmans through their descent.” The Brahmans’ internal religion is a variant of orthodox Brahmanical practices. In contrast to “Sanskritized” Brahmans elsewhere, the Rajopadhyaya Brahmans do eat certain meat, that of the goat and duck, but other kinds of meat and certain foods (such as garlic or mushrooms) are improper for them. They deviate from such Sanskritized Brahmans most markedly because of their participation in the Tantric aspects of Bhaktapur’s religion, as we have described in chapter 9. Within their own group the Brahmans must provide their own priests, a situation they share with the lowest thar s in Bhaktapur, those below the level that one or another kind of external priest will serve. A Rajopadhyaya Brahman’s family priest or purohita must be someone who is not a patrilineally linked member of the family, and thus he must be linked through marriage to one of the family’s men, with the important exception that the paju , the mother’s brothers, or their sons are also not acceptable.

Rajopadhyaya Brahman boys learn Sanskrit, the reading and chanting of the Vedas, traditional philosophical and scriptural aspects of Hinduism, and how to conduct ceremonies and the like from their fathers and uncles, beginning with a three-month orientation instruction at the time of their Upanayana initiation to full Brahman status. Until about fifteen years before this study, there was also a special school in Bhaktapur where the Brahman students received extra training in Sanskrit and the Vedas from scholarly teachers. Much of their training came more informally from observations, instructions, and discussion—first on the practice and meaning of the worship that tookplace in their own houses, and later, after their Upanayana initiation, while accompanying and helping their fathers and uncles as they performed ceremonies for others.

The Rajopadhyaya Brahmans have various functions as priests in Bhaktapur. Some are narrowly related to specific client families; others to the religious and symbolic life of the larger civic system. They act as domestic priests, purohita s, to a wide span of unequivocally “clean” thar s; one definition of being fully “clean” is precisely that a Brahman will serve as the thar’ s family priest. Those thar s whom the Brahmans will serve as purohita are generally those at and above the status level X, in our listing of social levels m chapter 5, that is, from the lowest levels of the Jyapu thar s and above. In another socially circumscibed function, they serve the Chathariya and Pa(n)cthariya thar s, as well as other families within the Brahman group, as guru s in the transmission of Tantric knowledge and in the conducting of some kinds of Tantric worship.

In addition to these services for client families, the Rajopadhyaya Brahmans have public functions. These include their essential representative position in the city at the summit of the purity-ranked aspect of the status system. In the terms of this system they represent the exemplary highest position. They help define, by means of contrast, king, aristocrats, and technicians of the ordinary, physical world in one kind of opposition, and the maximally impure, the untouchables, in another.

In the course of the public symbolic enactments of the annual festival calendar two major “focal” festivals (as we will call them) have as one central reference the royal palace in association with its temple complex, the king’s tutelary goddess Taleju, the Malla king himself (represented by Taleju’s chief Brahman), and the king’s Rajopadhyaya “Guru-Purhohita. ” The Taleju Brahmans are focal actors in these two major festival sequences Mohani and Biska:. In Mohani Taleju’s chief Brahman presides over the sacrifices and the rites that bring the Goddess to her full power at the time of the agricultural harvest for “the protection of the city.” In the Brahman’s association here with king, palace, and Taleju, he is a focus of attention for the whole city. This royal context of power in a sense protects and isolates him as he represents publicly his role as a priest of the dangerous deities, a role that, as we saw in chapter 9, he usually performs in private arenas.

Some Rajopadhyaya Brahmans work as temple priests, pujari s, a function that, as we will note below, they share with other kinds of priests. Some also earn part of their living as public storytellers, re-counting the stories of the Hindu tradition that form an important interpretive background for many of the city’s ritual and festival activities.

In his central roles the Rajopadhyaya Brahman is a complex priest. On the one hand he is the exemplary pure figure of a “Brahmanical religion”; on the other he is the powerful priest of an extramoral religion of power.

One thought on “The Rajopadhyaya Brahmans”